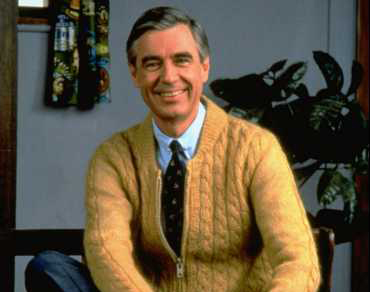 If Mr. Rogers Were an iPad Developer

One of our greatest heroes and role models is Mr. Fred Rogers. The spirit in which he engaged children and truly cared for them is something we try to emulate in everything we do.

If there is anything we would consider a guiding philosophy, it can be found in the following video. Here we see Mr. Rogers defending funding for PBS before the Senate.

In a nutshell, Fred begins by saying that he is â€œconstantly concerned about what our children are seeing [on television]â€ and refers to the violence in cartoons and other shows aimed at children as â€œbombardmentâ€. He shares that the drama in a childâ€™s ordinary day can be much more engaging and healthy than violence and that his show, in contrast, provides an â€œexpression of care every day to each childâ€. Rogerâ€™s conviction and passion is palpable in the video and you can see the notoriously grumpy Senator get goosebumps and make a 180Âº turn, granting the $12 million in funding within 6 minutes. If, at this point, you have not seen the video please go watch it now; it really is quite moving.

Mr. Rogers recognized the revolution in technology that was television and he knew the huge effect it would have on the development of children. Instead of fighting against it, he chose to be a positive force and provide healthy content for kids and he did it with authentic care and passion. Today we have a new revolution in technology with touch-screen devices. Weâ€™ve seen the â€œbombardmentâ€ that is on the App Store and we want to provide for these devices what Mr. Rogers brought to television. We want everything we do to be infused with a meaningful expression of care and to be a healthy part of a childâ€™s interactions. We like to imagine what Mr. Rogers would have done if he had made apps for kids and that has become our standard for everything we do.

Mr. Rogerâ€™s show always ended with the same words and weâ€™d like to end with them also: â€œyouâ€™ve made this day a special day by just your being you. Thereâ€™s no person in the whole world like you and I like you just the way you are.â€